Starting on Tuesday, September 10, 2019, you can join the KUTERRA mission to bring the most environmentally sound, safe, and healthy farmed salmon to people who care about the food they eat. The KUTERRA facility was founded by the 'Namgis First Nation  and is located on Northern Vancouver Island, just one kilometre from the ocean. Their sustainable aquaculture system helps create the best possible environment for growing salmon that meets consumers most demanding requirements.

What does KUTERRA do to operate in a sustainable way?

The KUTERRA farm was designed to use as few resources as possible: 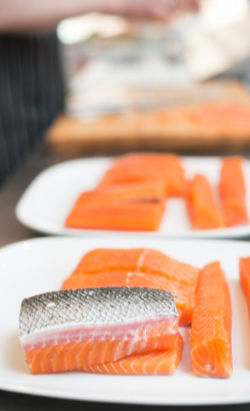 What sizes and specs will be available for KUTERRA salmon?

Intercity Packers will have KUTERRA available at the following specs starting Tuesday, September 10 2019:

How do I order KUTERRA salmon?

If you already have an account with Intercity Packers, then you can reach out to your sales representative anytime to place your order. If you are a restaurant or retailer and do not have an account with us yet but would like to carry KUTERRA salmon, then please fill out our new customer form here. If you are looking to purchase KUTERRA salmon for your personal use at home, we appreciate your interest in choosing sustainably-raised salmon, but unfortunately Intercity Packers can only sell directly to food service establishments at this time. To stay up to date with what retailers are carrying KUTERRA, please check out our instagram account @intercitypackers.

How does KUTERRA salmon taste?

How does KUTERRA raise their salmon?

KUTERRA raises their fish on land in very large tanks, using technology called RAS (recirculating aquaculture system). This system cleans and reuses water so they use very little water, and captures all their waste so it doesn't harm the environment.

Where are KUTERRA salmon raised?

The KUTERRA farm is on northern Vancouver Island near the Nimpkish River, east of Port McNeill.

Yes, unlike Atlantic salmon raised in net-pens, KUTERRA has undergone the Monterey Bay Aquarium's rigorous sustainability assessment process, the most respected independent seafood ranking measures in the world. The result is that KUTERRA has achieved a green, Best Choice ranking from Monterey Bay Aquarium's Seafood Watch. KUTERRA also has been designated a Best Choice by SeaChoice and is recommended by Ocean Wise.

How can raising salmon in tanks be good for the fish?

Growing salmon in closed systems reduces environmental stress on the fish because they don't face predators, parasites, pathogens, or harsh conditions such as low-oxygen periods. Salmon are schooling fish and even in nature collect in densities comparable to those in tanks. The KUTERRA team watches for signs of stress, such as change in appetite or growth, and ensures that conditions at KUTERRA are optimized for fish growth and low stress. The harvesting process is also designed to be as quick as possible and to minimize stress. 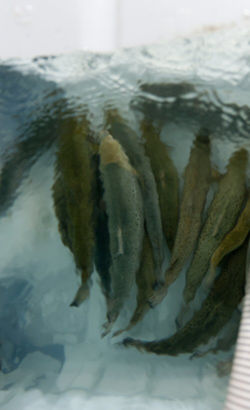 Is KUTERRA salmon raised with hormones, antibiotics or pesticides?

KUTERRA salmon get the benefits of a controlled environment without the challenges they would face being raised in net-pens in the ocean, and one of these benefits include KUTERRA is raised with no use of hormones, pesticides or antibiotics.

No, KUTERRA salmon are not genetically modified. Our salmon live in controlled conditions, which includes temperature, salinity, lighting, feeding, water current and other conditions, which can be optimized to minimize stress and maximize growth rate.

How humanely are the KUTERRA salmon treated?

When fish are content and unstressed they show it in their behaviour, healthy appetites and fast growth rates. KUTERRA salmon show all these signs. It makes us confident that we have the best conditions for the fish. These conditions include such things as the best water temperature and oxygen content. Our fish are also protected from predators, parasites, and pathogens, which reduces their stress.

Why do you raise Atlantic salmon in Western Canada?

Atlantic salmon is one of the main types of salmon that grow well on a farm, and it's the salmon of choice for commercial growers. But the reason KUTERRA chose to grow Atlantic salmon is because it's the preferred salmon species of millions of seafood eaters. KUTERRA wants to lead the way in meeting this demand for Atlantic salmon with farming practices that don't harm the environment. Let's show that Land-Raised™ Atlantic salmon aquaculture is the way to do this and to improve salmon quality at the same time.

What is the nutritional benefit of KUTERRA salmon?

Each kilo of protein in KUTERRA’s feed grows more than two-and-a-half kilos worth of protein in their fish, based on calculations by the Monterey Bay Aquarium's Seafood Watch program.

Where does the salmon’s food come from?

KUTERRA feed is made by Skretting Canada in its Western Canada plant in Vancouver, BC. In 2012, Skretting became BAP-certified (Best Aquaculture Practices), the first in North America. It became GlobalGap-certified in 2014.

Skretting sources approximately one-third of our feed ingredients from Western Canada. Skretting sources fish from more than 13 countries, changing as needed to ensure sustainability.  At times our feed includes trimmings that are byproducts from processing fish that are caught for other consumption. To learn more you can read Skretting's sustainability report here. Chapter 5 of this interactive document covers ingredients.

If their food has wheat, do their fish contain gluten?

No, all the gluten in the grain is fully digested by the fish, so KUTERRA fish are gluten-free.

The feed contains a natural pigment called Panaferd, which is extracted from organisms such as yeast found in nature. It has the same components found in the feed of wild salmon, which give wild salmon their colour. 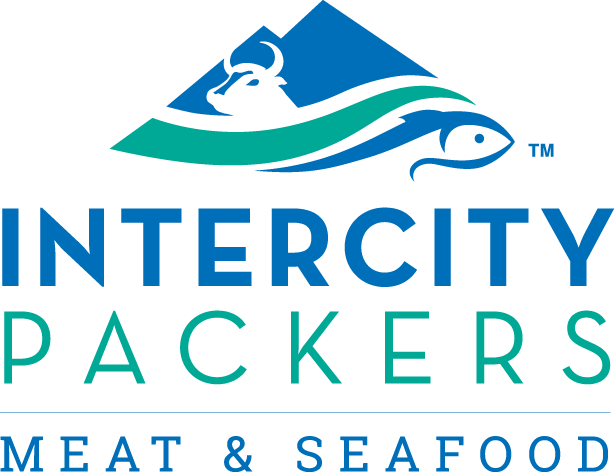